Canada's fifth most populous province, Manitoba, has a considerably strong economy which is based on natural resources and related industries. In order to meet demands of industries and the economy, the province welcomes foreign skilled workers and professionals under Manitoba Provincial Nominee Program (MPNP). The eligible candidates having desired knowledge, training, skills, work experience and language proficiency are offered job opportunities that are in sync with Manitoba Provincial Nominee Program In-Demand Occupations. The list includes occupations and industries which are in demand in Manitoba. The provincial authorities keep updating the Manitoba In-Demand Occupation list as per the labour market information.

Manitoba is the largest producer of sunflower seeds, dry beans and potatoes in Canada. Portage la Prairie is a major potato processing centre. It is also an epicentre of McCain Foods and Simplot plants that provide French fries to fast food chains such as Wendy’s and McDonald’s. The provincial capital, Winnipeg, is known for Lake Winnipeg, tenth-largest freshwater lake in the world. 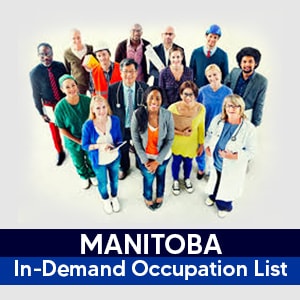 Another prominent location is Hudson Bay. It is the world's second-largest bay by area. Manitoba is at the heart of the giant Hudson Bay watershed which used to be the busiest fur trade centre. Around 12 percent of Canada's farmland is in Manitoba, hence agriculture, farming, cattle rearing and animal husbandry, are some prominent occupations and industries in Manitoba.

The agricultural and dairy production units are heavily dependent on transportation and warehousing facilities. These domains roughly provide employment to 34,500 people, or around 5 percent of Manitoba's population. The trucking companies account for 80 per cent of Manitoba's merchandise trade to the United States. Manitoba is headquarter of five of Canada's twenty-five largest employers in the for-hire trucking sector. Clearly, the trucking industry constitutes a major part of Manitoba’s economy.

Major employers in Manitoba are government and government-funded institutions, financial agencies, educational institutes, hospitals, private sector industries and so on.

Churchill's Arctic wildlife is a major tourist spot in this Canadian province. Manitoba is the only province in Canada with an Arctic deep-water seaport. Tourists also visit Manitoba to get a glimpse of polar bear and beluga whale.

The Manitoba PNP In-Demand Occupations List provides updated listings of different occupations that qualify as ‘in-demand’ in this Canadian province. According to Manitoba provincial nominee program in-demand list many occupations are limited to specific skilled streams of the Manitoba PNP. It means that candidates must fulfil eligibility criteria and requirements for specific occupation and immigration pathways. It is important to note that eligible candidates working in an in-demand occupation are given priority in Expression of Interest draws. In some cases, candidates are declared eligible for one of the immigration pathways despite not having relevant work experience in specific listed occupation.

Find below detailed list of occupation in demand in Manitoba province with NOC:

Experts suggest that the eligible candidates should seek guidance from trusted immigration consultant like Signature Visas to secure job opportunities under Manitoba provincial nominee program (MPNP)  in-demand Occupations/Jobs. The consultant facilitates guidance, tips and support from experts, including professionals working in different industries and domains in Canada. Signature Visas offers updates and industry trends on Canada immigration. The consultant is one of the leading experts in providing guidance to eligible candidates on MPNP in-demand occupations so that they are able to secure bright and secure future in Canada. For free assessment and assistance call us +91-9911659888.