The Atlantic Immigration Program (AIP) caters to requirements of labour markets and skills based industries in four Atlantic provinces viz Nova Scotia, New Brunswick, Newfoundland and Labrador and Prince Edward Island. After a successful run for five years, the Atlantic Canada immigration program, which was initiated in 2017 for immigrants and their families to work and settle in Canada, has been made a permanent pathway in 2022. It is a highly successful program where updatation and adjustments had been made from time to time to include changes as per the market requirement. The Atlantic immigration program provinces have therefore agreed to convert the program into a permanent gateway from January 2022. Officially, it will be known as Atlantic Immigration Program (AIP). Experts opine that the Canadian federal government offered job opportunities to as many as 7,000 immigrants through AIP till 2021.

One of the most pertinent changes introduced by AIP provinces was that of permission being granted to the spouses and Common law partners to apply for an open work permit under the LMIA with the exception in code C41.

What is Atlantic Immigration Program

The AIP is mutually beneficial platform that supports both immigrants and Canadian employers seeking young skilled workers and professionals to run industries and manufacturing units efficiently. Every year Canadian employers assess several applications of immigrant seekers and recruit them based on qualification, work experience and demand of labour markets.

The AIP highlights five domains where job opportunities and growth is plenty. These sectors/ focus areas are trade and investment; entrepreneurship and innovation; skill-based industries; real estate and infrastructure development; and growth based units having environmental centric norms and compliance mechanisms. 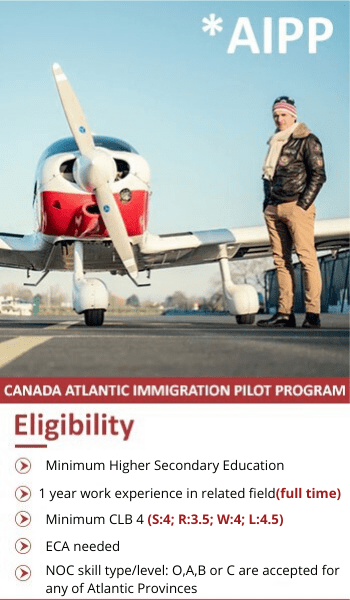 👉🏻 Nova Scotia
The biggest and wealthiest of the four Atlantic provinces, is renowned for shipbuilding and naval bases. The province thrives on industries and agencies based on natural resources, particularly coal and fishing, as well as tourism. The provincial capital is Halifax.

👉🏻 New Brunswick
This mountainous province is majorly covered by forests. The key industries operated here are logging, shipbuilding, gas stations, lumber mills, retail stores, media hubs and so on. The Bay of Fundy, which is home to the highest tides in the world, is located on its southern coast. The provincial capital is Fredericton.

👉🏻 Prince Edward Island
This smallest province in Canada in terms of both land area and population relies on potato farming, fishing, aerospace, agriculture, fisheries, Information and Communication Technology (ICT), bio-science, tourism and so on. The multicultural and multilingual society in Prince Edward Island is home to many families of Scottish, Irish, English and French origins. The provincial industries have been witnessing influx of immigrants in last two decades under PEI PNP. The provincial capital is Charlottetown.

What is the AIP Program eligibility criteria?

The AIP eligibility will depend on the pathway through which the applicant has opted to relocate to the region. To understand how the eligibility works let us look below:

The Atlantic Immigration Program has two programs for skilled workers and one program for international graduates:

This employer-driven program attracts a large number of professionals and skilled workers to work and settle in Atlantic provinces.
Applicants under AHSP and AISP (AIP requirement) must fulfill below-mentioned eligibility criteria -

Please note that eligible applicants with a job offer from designated employer in Atlantic Canada can apply for Canada Permanent Residence (PR). It has been observed that Immigration, Refugees and Citizenship (IRCC) expedites most of the applications under this program within six months. This implies that if all eligibility criteria are met, AIP processing time is lesser compared to other Canada immigration programs.

It is interesting to note that the language threshold for AHSP and AISP is lower than other Canadian economic immigration programs. Immigration seekers may note that IELTS score is valid for two years with effect from submission of visa application.

This program helps international students in Canada or those who have secured degree from recognized Canadian institutes to secure Canada Permanent Residence without having relevant work experience. Since AIGP is not Express Entry aligned the applicants are served on a first-come-first-serve basis.

The minimum eligibility criteria for AIGP is -

In order to welcome and retain talented international students and young graduates as work force in reputed industries, the AIGP ensures fast track of applications and pave direct way to secure Canada PR without hassle. Of late, the Atlantic Canada is said to have shifting focus on higher education and research activities, particularly in the fields related to provincial economy. The potential candidates can enhance skills and chances by making a feasible plan to apply for Canada PR through AIGP.

Other gateways for Atlantic Canada immigration

The Atlantic provinces welcome immigrants to work and settle through their respective Provincial Nominee Programs (PNPs). It is quite evident that through PNPs, the Atlantic Canada successfully allowed young professionals, skilled workers, international graduates, entrepreneurs and start up enthusiasts to contribute to growth and economy of these regions.
Since 2015, all Atlantic provinces have introduced at least one PNP in sync with the federal Express Entry program. It also allows eligible candidates to gain additional points and improve their Comprehensive Ranking System (CRS) score.

How long is the processing time for the AIP Program?

AIP Canada program processing time will depend on two things majorly - The labour demand in the region and the credentials of The applicant who wishes to relocate. However, since the program is all about meeting the employer's need for a competent and skilled worker, the program aims to help the applicants move to Canada as quickly as possible so that they can contribute to the region's economic welfare. Thus, the AIP Canada program processing time is one of the fastest.

A reputed immigration consultant, Signature Visas, provides valuable guidance which is apt to its clients from diverse background. The consultant offers correct and updated information on Atlantic Canada immigration and road that leads to AIP. A leading expert, that facilitates support to immigration seekers in order to carve bright career in Canada, Signature Visas has been assisting applicants for many years. For details on AIP call us at +91-9911659888