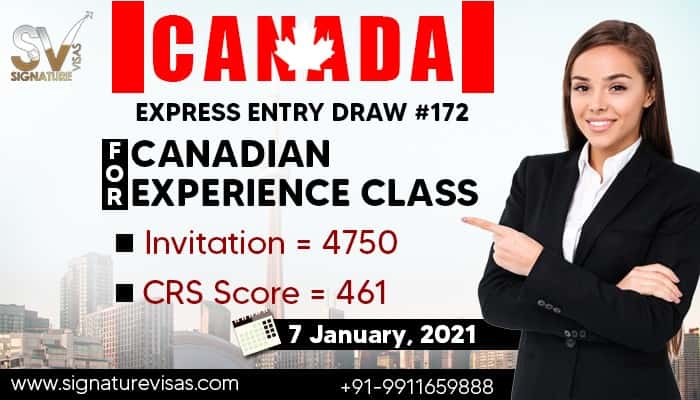 The Latest Express Entry Draw announced on January 7, 2021. Four thousand and seven hundred appellants got selected with a CRS score of 461. It was a CEC specific draw.

On January 7, the second invitation round of Express Entry draw was held in two days. There were a total of 4,750 Canadian Experience Class (CEC) candidates issued invites in the latest draw with a Comprehensive Ranking System score (CRS) of 461. The applicants who had the CRS score of 461 or above were shortlisted for relocation and provided the Invitation to Apply (ITA). The result of the Express Entry draw were released on January 8.

Just two days ahead of the CEC specific draw, The Canadian government had announced a PNP specific draw in which the minimum CRS score requirement was set at 813. In that draw, the IRCC invited 250 applicants. Applicants who received the Provincial nomination are eligible for 600 bonus points in the Federal express entry system score calculation. Thus, these candidates can meet the high score of 813.

The Key Highlights of the draw -

It is too early to predict, but it appears that IRCC  is returning to the program-specific draws just like it did in the early days of the Coronavirus pandemic between March and August. Towards the end of the year 2020, The IRCC returned to the all program draw with some of the high numbers of invitations being issued with a low CRS score requirement.

Express Entry program is a federal skilled workers program with three main economic class programs - Federal Skilled Worker Program (FSWP), the Federal Skilled Trades Class (FSTC), and the Canadian Experience Class (CEC). The applicants who meet the CRS score are shortlisted for relocation.  The points are calculated based on age, work experience, education, and proficiency in French or English.