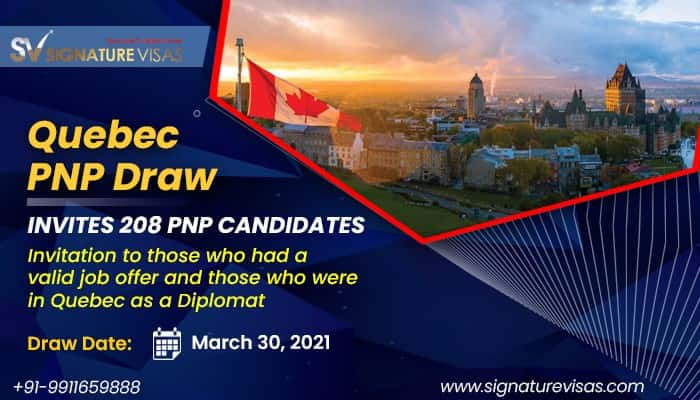 The Quebec province's second draw was announced, and it was more than two times bigger than the previous draw.

On March 30, 2021, the Quebec province conducted the second draw of the province, and it was twice as big as the first draw. The provinces elected 208 Immigration candidates for permanent selection.

The Ministère de l’Immigration, de la Francisation et de l’Intégration (MIFI) selected these applicants under the Regular Skilled Worker Program (RSWP) and these candidates should have an Expression of Interest (EOI) in Arrima, the online portal of Quebec.

There were two types of candidates invited in the latest round:

The latest draw is the second of 2021 of Quebec. The first draw of the province was in January, in which the province had issued 95 invitations.

What is Quebec's Arrima portal?

Arrima was launched in 2018, and the appellants are selected from the pool for the RSWP. Earlier, the province followed a "first-come, first-served" approach. But, it was changed to an Expression of Interest system as per the Provinces demand and integration of more abled and skilled individuals in the province.

Applicants who are 18 years old or even older are interested in Quebec Province immigration through the RSWP. They need first to create a profile in an Arrima. The applicants who meet the point score requirement are selected from the pool.

MIFI invites the most qualified candidates based on local market labor needs and the appellant's ability to integrate into Quebec society. The selected applicants gave 60 days to submit a complete application to pay the fees and required documents.

What is the Immigration target for Quebec province?

Quebec province and the federal government work in collaboration with one another to meet the immigration target of the province, and for the year 2021, they have decided to meet the shortcomings of the year 2020 and welcome up to 47,500 newcomers. Canada aims to welcome around 400,000 new immigrants in the year 2021 through the different streams, and most of the Immigration is expected to be through the Express Entry portal.

The Express entry is the federal system of skilled worker’s selection and is the fastest Immigration for Canada.