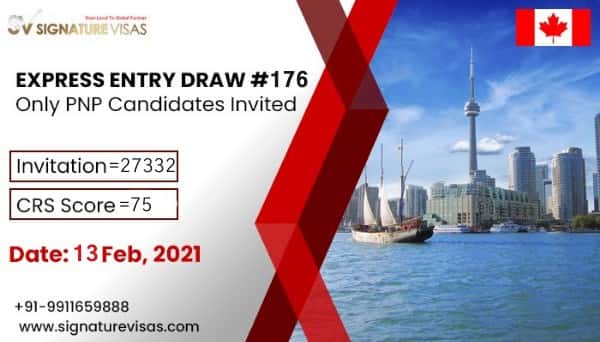 It was a draw like never before; the latest Express Entry draw of Canada selected 27332 appellants to apply for permanent residence.

On February 13, Immigration, Refugee, and Citizenship Canada (IRCC) announced a historic draw. It invited the Canadian Experience Class (CEC) candidates in the latest round in an unprecedented number 27332. The Comprehensive Ranking System (CRS) score was the lowest ever at 75 points.

The Key highlights of the draw - February 13

The applicants were selected from the Express Entry pool. The Express Entry program of Canada immigration was introduced in 2015, and the last express entry draws on February 9, in which 654 Provincial Nominee Program (PNP) were selected. This makes the total of 27,986 Invitations to Apply (ITAs) issued within a week.

The tie-break rule for the latest draw was set on September 12, 2020, at 15:31 UTC. This latest draw is full-fledged proof that the Canadian government is committed to meet the 2021 target of 401,000 new immigrants. The newcomers will be managed through the 2021-2023 Immigration Levels Plan. For next year the target is 110,500 and then 113,750 in 2023. In the immigration plan, Canada has provided Federal High Skilled programs of the Express Entry the largest share of new immigrant allocations for the next three years. Thus in the future, it is expected that the Express Entry system will be the main source of new immigrants.

Canada’s immigration minister, Marco Mendicino, has stated his intentions to achieve the ambitious immigration targets by converting more temporary residents to permanent residents during the pandemic.

The latest draw is an example that Canada is all set to meet the immigration targets and not wait for the end of the year 2021 to meet the new targets.

anada Express entry program is an Immigration pathway for skilled workers. Under this program, there are three subcategories - the Federal Skilled Worker Program, the Federal Skilled Trades Program, and the Canadian Experience Class. The applicants are picked from the pool based on the point score achieved. High scoring applicants are selected based on their age, education, work experience, language proficiency in English or French, and other factors