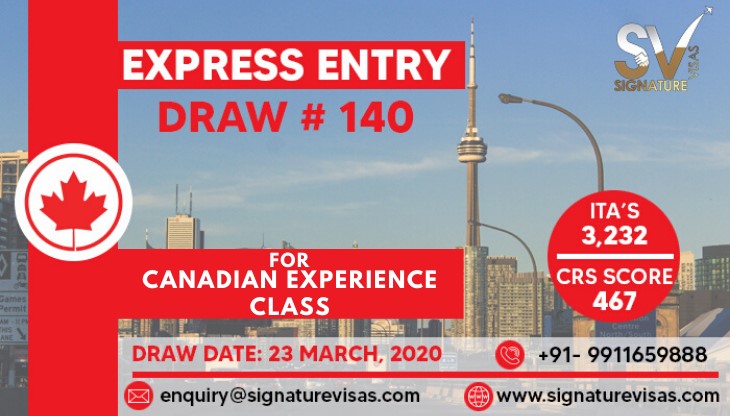 On March 23, 2020, the federal express entry draw was announced in which 3232 candidates were invited with the CRS score benchmark of 467. The selection was in the Canadian experience class program. Before this, the last draw was held on March 18 and released on March 20, which is at a gap of only five days between draws.

In a less than five days gap, the second express entry draw was announced by the Canadian government in which 3232 candidates are invited for permanent residency. The selection score for the applicants was set at a Comprehensive ranking system (CRS) score of 467 points for the Canadian Experience Class. It means all those candidates who have 467 CRS points or above they are shortlisted for immigration.

It is the second Canadian Experience Class specific draw since 2015. Before this, the last draw was held on March 18 in which only 668 candidates were sent an invite. In a usual gap period of only five days, the Canadian government decided to announce another draw on March 23 with a high invite number of 3232. The Canadian government could have taken this step in lieu of the high immigration targets of 2020 and 2021. it is expected that more draws will be held on the IRCC in recent months to help the government meet their goals.

Just like other times this time as well, the Tie-break rule was applied, which was set on November 25, 2019, at 14:00:35 UTC. It means all the applications with the CRS score of 467 and submitted before the set date and time will be considered.  With this latest draw, the total number of invites through the express entry system has now reached 22,600. This draw is a reminder that even with a low CRS score, there are chances of selection in the Express Entry Program. However, if there are applicants who have failed to meet the score, they should not lose hope and choose the option of the Provincial Nomination Program for their immigration.

The candidates who are selected through the provincial nomination are eligible for the 600 bonus points in the express entry system.

Signature Visas has able and skilled staff who are completely aware of the latest changes and developments in the world of immigration; we can help you find the best pathway for relocation as per your credentials. Further, we also offer additional services like IELTS guidance and Pre-assessment of application. Contact at +91-9911659888.